North American Advances in Cycling Infrastructure that Europe Could Benefit From

Recently, a European consultant asked a question that prompted some interesting thinking. Normally, we are focused on bringing European thinking for furthering cycling usage growth to this side of the Atlantic Ocean. Now, the thought of suggesting local techniques for European usage is an interesting twist.

Just off the airplane from again being inspired with cycling in Strasbourg/Alsace, Dijon and Burgundy, Barcelona, and Northern Bayern. Regional and high-speed trains enhance the experience when travelling with folding bikes. (The German Deutsche Bahn’s ICE trains could really use more luggage space in their cars.) 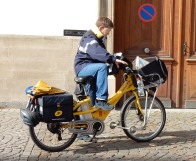 Passage of cyclists across arterial streets- It is still a curiosity to me that the City of Vancouver’s vigorous use of traffic signals at arterial streets with push buttons that are cyclist-activated on neighbourhood and local streets for cyclists and pedestrians is not used in other municipalities in NA and other lands. With response time for pushing the button and turning on the cyclist/pedestrian green signal from instantaneously to 30 seconds plus time laps, cyclists can move across arterial roads quickly and with more safety. Trip time is reduced. The City’s cycling growth rate on local roads from the 1990’s to now certainly indicates the value of this design technique.

Bike racks on and inside transit buses-While bikes on trams, metro, and commuter lines in Europe accept bicycles, not having the NA approach to bike racks on and inside city and regional buses limits the number of cycling trips, without trip flexibility, people’s uneasiness to take longer trips without an alternative mobility option, and flexibility to return home in case of bicycle malfunction. Certainly this is a limiting factor for cycling growth, as multi-modal trips are limited. TransLink in Vancouver and the Ontario GO system are prime examples of this capacity, especially the GO system which provides capacity to travel on buses with bicycles for trips over 100 km in distance from Toronto.

Traffic-calmed bike routes on neighbourhood streets- The City of Vancouver’s vigorous approach to traffic calming neighbourhood and local streets, which have been designated as cycling routes, has been the backbone to the City’s growth of cycling by people of all capacity, cycling skills, and willingness to use cycling as a transportation mobility option. 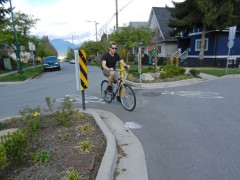 Video-controlled traffic signal timing-Back in 2006, I was passing through a small mid-west US city that had 10 traffic lights on its main street. I was able to pass through the municipality without ever stopping and setting down my foot on the pavement. Quickly, I learned that a red light meant that it was time to balance on the bike at a stop line for a few seconds. One car on the intersecting street meant a five second signal and yellow light transition time before continuing on. Two cars meant a 10 second green light for them and so on. There were video cameras at the intersection detecting cars and cyclists and controlling green light phase time to cross the intersection. Trip time for all was much improved than waiting 90 seconds to minutes for a traffic light to change when there was either no or low traffic on intersecting streets.

se of cycling advocacy groups by municipalities in providing services and products-What is unclear to me after some discussions with cycling advocacy groups in Europe is the use by cities and states of bicycle advisory groups, cycling advocacy groups, and cyclists in the consultation and design of the local cycling network, infrastructure, ancillary services, products, and provision of support programs. While the use of cyclists in shaping cycling facilities by cities, provinces, and states varies greatly across North America, the results are easily visible when looking at cycling mode share, the percentage of female cyclists, cycling by children and seniors, and the cycling growth rate.

These are some quick observations without spending much time on reflecting on the differences in cycling between NA and Europe. Levels of comprehensive networks and cycling infrastructure design that will appeal to non or infrequent cyclists to use cycling as a transportation option tends to vary by city and state rather than by continent, my observation.