A grey morning.  Snow falling and whipped around by the wind.

Ahhh, winter has arrived.  Time to mount the studded tires on to the city bicycle.

For the last years now, removal of snow for facilitating winter cycling has increased in interest in North America.  In fact, a conference on winter clearing of cycling infrastructure will be held in Winnipeg this winter.  2nd International Winter Cycling Congress, 2014-02-12-13, http://wintercyclingcongresswinnipeg.org.

Now, in Copenhagen, clearing of the cycle tracks takes priority over the roads.  In Calgary, the city started to clear some of the pathway system along the Bow and the Elbow Rivers years ago.  This followed years of where cyclists kept the paths open with their own snow blade pulled by the first cyclist on the way to work or to home each day.  Public demand keeps increasing the city’s snow clearing effort.  More and more the pathways along these two rivers and along Nose Creek are added to the program.  Snow clearing starts at 7:00 am in the morning or earlier. 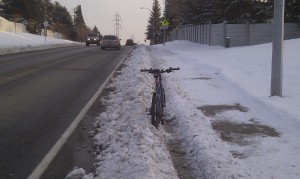 Last year, bike lanes on roads were added to the program and is in the teething stage of snow clearance.  The local Bike Calgary organization is providing daily reports on the snow clearing performance of the city. 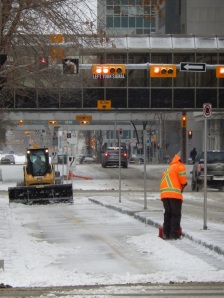 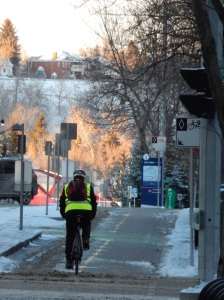