The Third Transportation Revolution and the Evolution of our Cities

Recently, Dr. Eric Miller from the Faculty of Civil Engineering of the University of Toronto spoke in Vancouver on the third revolution of transportation within cities.  If he had been teaching back when I was there I might have focused more on transportation and urban planning than trying to learn how to design large buildings and bridges. In hindsight, it is amusing to reflect that I moved into transportation, the movement of goods, three years after receiving my undergraduate degree.

“For over 30 years, Eric Miller’s research into the interactions between humans, urban land use, transportation, and the environment has been on the cutting edge. His work in the modelling of vehicle emissions, pollutant dispersion, and their exposure to human populations has helped to develop a more comprehensive understanding of these fundamental urban planning issues.

Currently, his Integrated Land Use, Transportation, and Environment model (ILUTE), considered a world-leading contribution to the science of urban simulation, continues to contribute to the increased sustainability of living environments both internationally and here in Canada.”

He talked about how revolutions in transportation have effected the shaping of cities.  The first two revolutions, wheel on steel (rail) and then car-based, meant more speed in transporting people allowing for homes to be farther removed from employment and facilitating creation of urban sprawl.  The third revolution, the one that we are in now, is different as it is not about technology advances.  It is about social forces and drivers.  It is about the rebalancing of transportation options.  The last revolution was car based, speed based, that created such a demand for road space for cars that cannot be satisfied physically in cities, both from responsible land use and financial health of city governments.  Now, a correction is needed.  Yet continuously, there are still initiatives by governments, landowners, and developers to run against the fact that car growth is not economically sustainable by cities or beneficial for the health of the population.

As this is being written, the Government of British Columbia is forcing in a replacement of the Massey Tunnel with more car lanes under the South Arm of the Fraser River within agriculture reserve lands, while gasoline sales are on the decrease.  People are starting to abandon two-car family situations and embracing transit, car share, and cycling as more desirable and economically-feasible forms of transportation for their families.

Dr. Miller’s argument is that a rebalance of transportation modes is now needed, the third revolution.  So, the question is “Why are the governments, land owners and speculators, and other industry leaders still crying for more car traffic lanes?  Why are the governments not embracing and focusing their resources and taxpayers’ monies instead on advancement of combined mobility including rapid transit corridors with cycling as the feeder systems?

During the excellent lecture there seemed to be three influencers that were missing in the arguments presented:

For a discussion on transportation and its influences on urban land use, it was strange not to hear arguments that congestion is good to have.  With congestion and the resulting personal inconveniences, these are forces for people to really think about their transportation mode choices and to think about which would really benefit their lives, instead of using cars as the default mode for transportation neglecting the costs on liveability and sustainability of our cities and of our lives.  Without barriers, people tend to make easy choices, not the best choices for themselves or for society.

Congestion is a tool in planning for planning liveable, vibrant, sustainable, green urban cities.  Congestion should be used by the cities as a strategy and a tactical tool for causing people to make rational choices for transportation and their personal contribution in transforming their cities to a people-oriented cities. 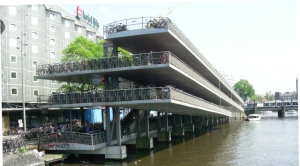 In the third transportation revolution, Dr. Miller spoke to transit as the alternative.  What was missing in the dialogue was the contribution that cycling and combined mobility of transit and cycling makes.  Just go to Copenhagen, Amsterdam, and other European cities were thousands of bicycles are parked in front of train stations.  There are cities with parking garages of 3,500 to 10,000 bicycles, not cars.  Just go to Paris and see the use of public bike systems as an adjunct to transit.

There is also the roll of cycling to work or to other destinations.  Go to Copenhagen and experience cycling with 35,000 other cyclists on a street on their way to work or home where traffic lanes have been reassigned to cycling and where traffic signal timings were set to accommodate the speed of cyclists.

Deaths resulting from the London Fog
Dec 7, 1952
©Image courtesy of the Internet


Environment fits into the transportation revolution cycles, the shaping of the city, the drivers for suburban sprawl, and desire for perceived suburban clean air. In the first revolution, coal produced fine particulates and degradation of the quality of the air that drove people out of cities into suburbs.  Do you remember the fogs of London and the deaths left behind? It started on Sunday, December 7, 1952 and four days later the population of London was 12,000 people less.  In the second revolution, cars and trucks are producers of greenhouse gases and fine particulate matters that is one of the drivers for suburbia and sprawl.  The third transportation revolution cycle brings back the role of transit, cycling, and walking with its reduced environmental impacts, especially with the use of electrical power instead of diesel-powered buses and other vehicles.  Two transportation revolution cycles increased pollution of the air, as the revolutions were driven by technology.  The third revolution, driven by social influences, will improve the quality of air and reduced pollution.  Is this the difference between technology and business driven cycles than social driven agendas, the amount of degradation of the earth, the air, and the waters?

H-JEH Becker, Velo.Urbanism, Third Wave Cycling Group Inc., 2013
©Photograph by H-JEH Becker, 2013, unless otherwise noted
If you wish to expand the size of any image, then click on the image.